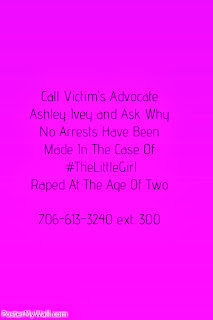 Posted by Nancy Lockhart at 4:02 PM No comments:

Posted by Nancy Lockhart at 2:59 PM No comments:

REVISED
Justice Is Not A Wrongful Conviction
#TheLittleGirl Raped at The Age of Two In Athens, Georgia
By Nancy Lockhart, M.J.

In a southern college town called Athens, Georgia, an African American child (#TheLittleGirl), was raped at the age of two for an extensive period of time in Athens, Georgia. The exact time frame? We're uncertain. We are certain however; that District Attorney Ken Mauldin sat on the executive board of a non profit known as The North Georgia Cottage. A 501(3)C with a mission statement that reads, "The Cottage provides intervention, advocacy, referrals, and support for survivors and families impacted by child abuse and sexual assault. The Cottage also raises awareness and provides prevention education about these issues."

#TheLittleGirl was provided services at this non profit agency and they too, dropped the ball. The Department of Children and Family Services sent the child to The Cottage to be examined and interviewed after one rape. Within this interview the child named one of the rapists. The victim child named and graphically described what was done to her. On August 17,2012 I briefly spoke with The North Georgia Cottage Executive Director who requested a signed "Release of Information" form by the adopted mother, to discuss the case with me. This was expected, however; the mother completed the form and Executive Director Salley Sheppard has never responded to my phone calls, e-mails or facsimiles afterwards.

In the year 2012 we were denied an incident report. The following report was obtained in 2013. Incident Report Number CRN 01-08-12-0812 Dated from 10-01-08 to Date 10-15-08 Aggravated Child Molestation Code Section 16-6-4. The incident report proves that #TheLittleGirl was raped five years ago – at least during the age of two. Further research and investigations may prove earlier dates of aggravated molestation.

During such time, Sexual Assault Center of Northeast Georgia, Inc.'s 2009, federal tax return shows that Ken Mauldin was a board member. The Sexual Assault Center of Northeast Georgia changed it's name to The Cottage, Sexual Assault Center and Children's Advocacy Center in October of 2008, according to their website ( www.northgeorgiacottage.org ). The Cottage Sexual Assault Center's federal tax returns from 2010, lists Ken Mauldin as a Director; while; the Re-Elect Ken Mauldin website shows him seeking re-election for District Attorney Tuesday November 2, 2004. Mauldin is currently the District Attorney and according to the Athens Clarke County website, " The Office of the District Attorney serves primarily as the prosecuting attorney in the Superior Court of Athens-Clarke and Oconee counties. In Athens-Clarke County Georgia, the district attorney is responsible for the prosecution of all criminal cases involving at least one felony charge. Additionally, there is a responsibility to pursue, when appropriate, certain civil actions such as RICO (Racketeer Influenced and Corrupt Organizations Act), drug, gambling, and bond forfeitures."  UPDATE: Mauldin Resigned from The Cottage Board after this information was made public.

Where Exactly Does Corruption Lie? Who Exactly Dropped The Ball and Why?

Since 2008, there have been approximately five officers shifting responsibilities within a dormant investigation. Approximately one year ago, a retired GBI officer was assigned. This past spring (2013), another officer has been assigned to the case. The retired GBI officer stayed in communication with me as well as, the adopted mother until the case was shifted to the fifth detective. That detective refuses to communicate. #TheLittleGirl gave vivid explanations about her abusers and her torturer. The Department of Children and Family Services found enough abusive evidence to remove her from the home of her biological mother and grandmother. The police did not make arrest(s).

After many campaigns to bring justice for #TheLittleGirl, detectives invited the adoptive mother and her guests to a meeting on May 21, 2013. Detectives started by saying that their independent doctors concluded that injuries to #TheLittle Girl were possibly obtained from falling off of a wooden rocking horse. Poor children do not own wooden rocking horses - Sir! Medical determinations from the child's physician and the child's statements remain ignored.

One man in question has asked for a polygraph test. This man is #TheLittleGirl's biological father. She stated information which actually sounds coached by her biological mother in reference to her father. She gives graphic details and names the individuals who raped and tortured her. I'm actually wondering if the biological mother had not coached her to protect mother and grandmother's boyfriends.

#TheLittleGirl's story hasn't changed and she could not have made this very graphically, descriptive information up. The biological father adamantly states that he did not rape his child. ( He would like a private polygraph test). He was recently convicted of another crime and there appears to be a rush to charge him with the rape of #TheLittleGirl, his daughter. As a result of the father's request for a polygraph, I located an expert who agreed to an independent test. The Little Girl did not give vivid details of her father however; she did give graphic details of rape by an additional man and torture by yet another. She very descriptively explains rape and torture as well as, the men who did it to her. Her story regarding the rape and torture has not changed. Athens- Clarke County Police Department, under the direction of Chief of Police Joseph H. Lumpkin Sr,refused to cooperate with an independent test and the cooperation of the police department is needed.

In researching years of service, I would imagine that Chief Lumpkin is nearing retirement. Lumpkin has a legacy of Doing Absolutely Nothing about the rape of a two year old baby within a five year investigation. Four of those years being dormant under his leadership. Why Did Athens-Clarke County Refuse An Independent Polygraph? Please visit #TheLittleGirl's

____________________
Nancy Lockhart, M.J. Is a former public school teacher and DeWitt Wallace Readers Digest Fellow. She is currently a legal analyst specializing in wrongful convictions and issues of grave injustices. She is known for creating the movement which secured Marissa Alexander's (Florida) appellate attorneys as well as, the movement which brought freedom for The Scott Sisters. She is the author of Locked Up, What To Do When Your AZZ Get's Locked Up – A Poor Man's Guide To Freedom. The book is a tool against mass incarceration. You may contact Ms. Lockhart: TheNancyLockhartShow (at) g mail (dot) com and www.NancyLockhart.net. @wrongfulconvict on Twitter and The Nancy Lockhart Show on Facebook. Follow The Nancy Lockhart Show on Blog Talk Radio.
Copyrights Nancy Lockhart
Posted by Nancy Lockhart at 6:12 AM No comments:

Listen To Legal Internet Radio Stations with TheNancyLockhartShow on BlogTalkRadio

Listen to internet radio with TheNancyLockhartShow on BlogTalkRadio

Listen to internet radio with TheNancyLockhartShow on Blog Talk Radio

From Writing Numbers To Algebra. Click On Your Grade